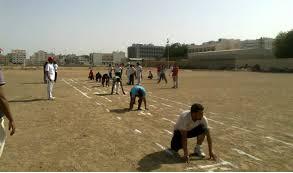 Sports activity in Uttar Pradesh has huge benefits and Raebareli being a progressive district of the state, acknowledges the importance of sports in life and gives huge priority to the same.

The love of sports in the district is visible through various initiatives taken by the citizens to promote different kind of sports in Raebareli. Be it schools or several sports association there is always classes and tournaments organized to promote various games. If not any formal occasion then at least small local tournaments are organized between villages or different localities to enjoy a fun-filled day with loads of excitement. Schools include various sports in their schedules to introduce children to multiple sports and explore their interest in the correct way.

One of the initiatives taken by the state government is the establishment of training centre at Raebareli by the Sports Authority of India. Located at the Motilal Nehru Stadium at Jail Road Raebareli, this Training Centre is spread over an area of 75X58 meters with eleven rooms and capability of accommodating more than 45 trainees at a time. The major training conducted here is on Volleyball and taekwondo. The total strength of trainees who attend regular coaching in volleyball here is 22 boys and for taekwondo are 23 boys.

Apart from this there is a strong admiration for the game of cricket in Raebareli. Just like every other Indians the sport has huge fan following in the district which becomes more visible on days when international cricket comes on air. Though no famous sports celebrity from this game have come up to play for the nation in past, but recently one player belonging to Raebareli has made it to pages of fame through IPL by becoming a member of Team Deccan Charges is Rudra Pratap Singh. Being a player of India under-19 World Cup, this bowler has comfortably made a place for himself.

But cricket is not the only game which fetches the interest of citizens here. Chess has equal prominence which is more promoted by the Raebareli District Chess Association led by Mr Sunil Srivastava. Apart from coaching, the association organizes several tournaments between different cities of the state and even state level championships in collaboration with UP Chess Sports Association. Every year these tournaments are organized and interested players who have already qualified in junior-level competitions or meeting the desired requisites can take part in the same. However, for details one can always contact

However this does not mean that other sports are neglected in the district. Various other sports like badminton, hockey, and football are hugely played in the area. Indoor games like carom and table tennis are also a favorite for the locals. Judging this popularity of sports activity, there are several coaching institutes which have come up in the district to encourage talented sportsmen from each field.