Behta Bridge is one of the top three tourist destinations after Samaspur Bird Sanctuary and Indira Gandhi Memorial Botanical Garden that people must visit when they are in Raebareli. The lush green valley and panoramic view of the grasslands from this bridge hold its own captivity. It is at Behta Bridge that Sharda Canal crosses the Holy River Sai through an aqueduct. This is an ideal picnic spot and locals as well as tourists gather here in huge numbers during winters to relish its scenic beauty. 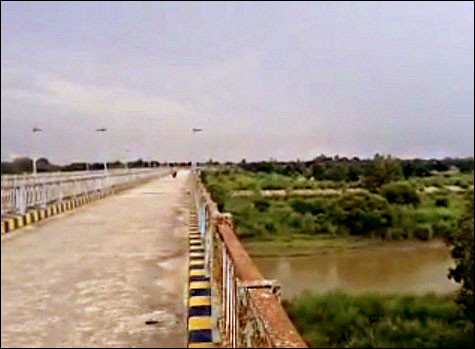 Behta Bridge is a long and rejoicing drive-through amidst the green lands nurtured and cultivated by waters of Sai. The Sharda Canal aqueduct passes through the very middle of this bridge at a high current that is why the prefix “Behta” is given to this unique Bridge. One can easily see the aqueduct passing beneath the bridge from above. The best time to visit this Bridge is in winters when the surrounding valley is full with mist settling down and your movement on the Bridge is not spoiled by heat from the summer’s Sun.

One can easily drive through their bikes or private cars to Behta Bridge. Alternatively, hire a private taxi that could be arranged by your accommodation service providers to reach this spot. Behta Bridge is situated at the outskirt of Raebareli and it would seemingly take about an hour to reach here from the city center.

Sai is one of the ancient rivers of India. It has a separate mention in Hindu mythology and is considered even sacred than Ganges thus Sai River is also named as “Adi Ganga”. This is primarily a precipitous river; many cities of Uttar Pradesh are situated on the banks of River Sai.

Sai River has a course of 100 kms in Raebareli district. It is 2 kms away from Raebareli Bus Stand and mostly flows towards the West of the city. Sai is a tributary of Gomti River that rises in Hardoi district of Uttar Pradesh. This separates the two districts of Lucknow and Unnao and bends south further down to enter the City of Raebareli. Sai River mainly flows towards the western course of Raebareli and turns east to cover the Southern border of Old Cantonment area in the city. Sai exits Raebareli at Kanpur in Pargana Salon.

About Sharda River and Sharda Canal

Sharda River is also known as Maha Kali River for it originates at the pond of Kali temple in Pittorgarh, Uttarakhand. This river shares the Indian borders with China’s Tibet Autonomous Region. Further down it forms the Western Border of Nepal with India and flows for as long as 223 kms along the international borderline. Mahakali River then leaves the International border and enters the city of Uttar Pradesh where it is called Sharda River.

Sharda River emerges from the glaciers of Northern Himalayan Ranges and is a perennial water body. Its water current has huge potential to be utilized for hydro electricity production and could alternatively solve many of the irrigational requirements of the lowland. These were the main goals to build a Canal over Sharda River in Uttar Pradesh. The main Sharda Canal is 45 kms long and has discharge capacity of 325.3 cumec.

The very holy River Sai and Himalayan River Sharda make the Behta Bridge a sought after tourist attraction in Raebareli, Uttar Pradesh. Travelers could spend their time by engulfing in the pictorial beauty around Behta Bridge. The banks of River Sai at this spot serves as a perfect place for picnic or an excursion.